Pack away those winter coats and slap on the sunscreen! Summer is finally here and what better way to celebrate than by taking part in a range of family-friendly activities within your local Borough. Here’s a list of events and locations you don’t want to miss:

1. Kettering by the Sea:

The annual Kettering by the Sea extravaganza is making a splash and returning to the Kettering Market Place from Friday 20th July until Saturday 18th August!  The perfect event for children of all ages with a variety of *FREE* activities. From getting creative with your sand castle skills in the sand pit to throwing some shapes during a hoop dance workshop, Kettering by the Sea has something for everyone.  Open Monday to Saturday from 10am till 4pm.
Click here to find out more and view the full activity timetable.

Less cute and fluffy but all the more fun. Face your fears with a family trip to Bugtopia in Great Cransley where you can book a 1 hour ‘Meet and Greet’ session to get up close and personal with a variety of creepy critters. It’s the fun, educational way to learn about insects you probably didn’t even know existed!
Click here for more information about prices, bookings and parties.

Aimed at children 8 years and under, these *FREE* summer playscheme activities around the Borough are showcasing performances from Looking Glass Theatre with The Three Little Pigs and Steve the Magician!  The shows run from Monday 23rd July till Friday 3rd August and there’s no need to book. Just turn up on the day and enjoy the fun.
Click here for locations and dates.

Come along and enjoy a selection of popular local bands and groups at Rockingham Road Pleasure Park this summer. All performances are on Sundays and will start at 3pm, with donations going to Cransley Hospice. If the weather is inclement, performances will be held in the nearby All Saints Church. Here is the full programme and line-up for 2018:

Join the sticker trail to win a host of fabulous prizes this summer. Grab your passports and explore to find trail stickers scattered around Kettering town centre from Friday 20th July till Saturday 18th August. Trails can be picked up at Kettering by the Sea from Monday to Saturday between 10am – 4pm or from the Kettering Museum and Gallery from Tuesday to Saturday between 10am – 4:30pm. Once you’ve retrieved all your trail stickers you’ll be entered into an exclusive prize draw. What’s more? This activity is completely *FREE* to take part in!
Click here to find out more.

Wicksteed Park is offering a fun, family boat trip ride around its lake to observe bats coming out to forage and feed again this year. You’ll be given a bat detector to hear their calls and view the beautiful lake scenery at twilight hours! The sessions start at 8pm, meeting at the Boathouse on Friday 10th, 17th & 24th August.  Suitable for children 8 years and over. Booking in advance is essential to avoid disappointment. To book call 01536 512475 ext 200 or pop into their Box Office.

Make the most of National Playday this year at the Manor House Gardens on Wednesday 1st August, with an Alice in Wonderland themed, fun-packed programme of *FREE* activities for the children. The event runs from midday to 3pm and includes face painting, craft activities, balloon modelling and tea party! For further information, contact: museumandgallery@kettering.gov.uk 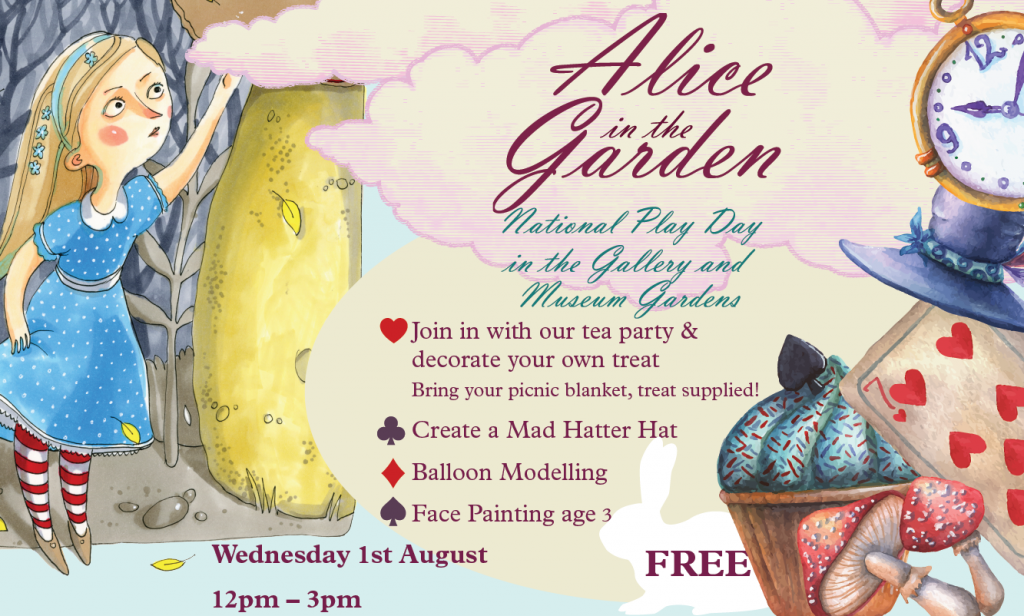 Pitch up a tent and spend quality time with the family at West Lodge Farm! Indulge in a home reared hog-roast and enjoy a range of activities, such as marshmallow roasting and stargazing, around the campfire. Your 2 day stay is a ticket only event and booking in advance is essential.  The family camping dates are Saturday 4th – Sunday  5th August and Saturday 11th – Sunday 12th August.
Click here for more information and to book.

Kettering Museum and Art Gallery are providing a range of fun-filled, jungle-themed craft activities suitable for children 3+ this summer! Running from Tuesday 24th July until Saturday 1st September, these *FREE* craft activity sessions offer something for everyone. There are different craft workshops taking place every day at the Manor House Museum.
Click here to find out more.

Don’t forget parking is *FREE* in all Kettering Borough Council car parks on the first three Fridays in August!

TV star comedian James Acaster will help kick off Christmas in Kettering this year by turning on the town’s lights at the eagerly anticipated ‘BIG Switch On’ event.  The local born comedian will take to the stage on Kettering Market Place on Thursday 30th November as part of a fun festive schedule.

The BIG Switch on will run from 5-7.30pm and, in addition to Acaster, will be hosted by Connect FM and will feature the cast of the Lighthouse Theatre’s Christmas Panto ‘Snow White and the Seven Dwarfs’ plus live music and entertainment for the whole family. 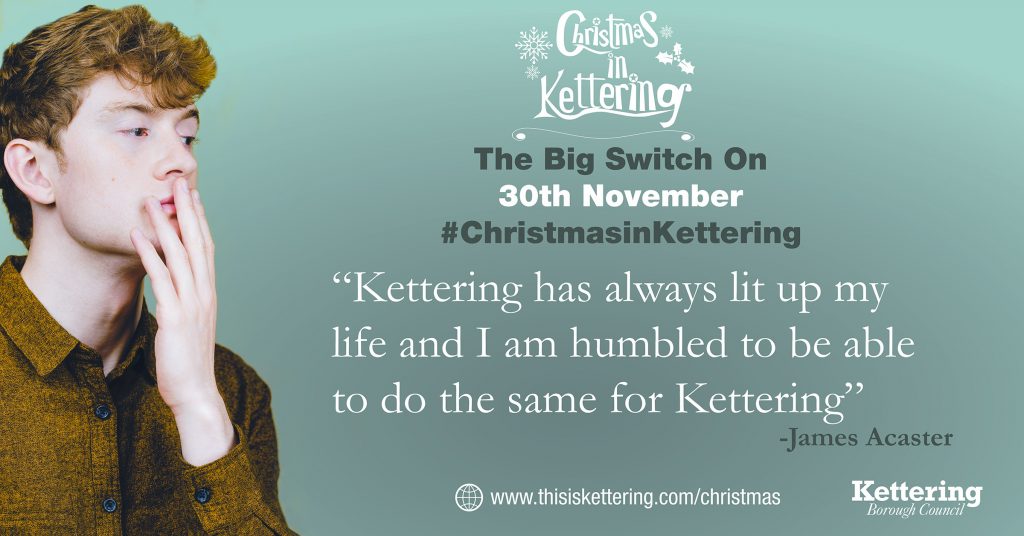 Stand-up comedian James Acaster has become a regular on TV panel shows such as Mock the Week and 8 out of 10 cats and has received acclaim from around the world, including a record breaking 5 consecutive nominations for ‘Best Comedy Show’ at the 2012-2016 Edinburgh Fringe Festivals. He also returned to Kettering to film a series of comedy shorts as he visits some of his old haunts and around the town, including Boughton House, The Manor House Museum and Wicksteed Park. *Watch all six ‘Sweet Home Ketteringa’ videos*

There will be plenty of chances to support your local town centre with late night shopping on Thursdays from 30th November. Small Business Saturday and the Teenage Market returns on 2nd December and a special Christmas Market will be held on Kettering Market Place on Thursday 14th December. There’ll also be the chance to wrap up warm and watch a festive film on the Big Screen on the Market Place on Thursday 21st December at 5pm.

As part of the Christmas festivities, and to support local businesses, Kettering Borough Council is offering FREE parking in its town centre car parks on the following days in December*:

These are in addition to the free parking that already operates in Council owned car parks on Sundays (all day) and evenings (after 6pm).

Further information on the full schedule of Christmas in Kettering activities will be unveiled over the coming weeks at www.thisiskettering.com/christmas

James Acaster said: “Kettering has always lit up my life and I am humbled to be able to do the same for Kettering”

Guy Holloway, Head of Corporate and Cultural Services at Kettering Borough Council, said: “There is an exciting line up of activities in Kettering Town Centre in the run up to Christmas this year. The programme of festivities we have put on will provide a range of attractions for the whole family. Christmas this year is definitely in Kettering!”

Councillor Lloyd Bunday, Kettering Borough Council’s Deputy Leader and Portfolio Holder for Community and Culture, said: “We’re delighted to have James Acaster switching on the lights in his home town and getting the local community in the mood for Christmas. This year’s events include entertainment for all the family which I hope will encourage lots of people into the town centre. Over the festive period, as well as the big switch-on, there’ll be Christmas Markets, a big screen movie and free parking days to enjoy.”