This summer, for the fourth year in a row, The Women’s Tour will return to Northamptonshire as the county hosts the opening stage of the race on Wednesday 7th June. Thousands of visitors will line the route, which starts for the first time in Daventry and finishes in Kettering for the third year in a row, and we can’t wait!

The world’s top female cyclists will race into Kettering Market Place knowing that winning will give them the honour of wearing the coveted Yellow Jersey as stage 2 of the Tour heads to Staffordshire. Previous winners in Kettering include Christine Majerus and Lotta Lepisto, but who will add their name to that list in 2017 and be the first to wear the Yellow Jersey?

The race takes place over five days from Wednesday 7th to Sunday 11th June, and will finish in the heart of London, around Regent Street. As part of the UCI Women’s WorldTour’s season-long programme of races for the world’s top riders, the peleton includes Hannah and Alice Barnes who grew up in Northamptonshire and whose family live locally in Burton Latimer. 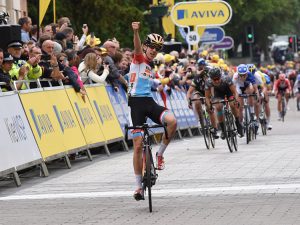 Keep an eye on the Women’s Tour website here as further details are released in the coming months!

Last year Kettering hosted the Tour’s grand finale where the overall winner, 2012 Olympic silver medalist Lizzie Armitstead, was presented with her winnings in front of a thrilled home crowd.

The Market Place will once again be transformed, with a 200m final straight running along Sheep Street towards the finish line, podium and viewing areas for fans and VIPs. On the day, as well as watching the prestigious cycling event you’ll find an exciting range of activities for all ages planned. Join in the fun with all sorts of crazy bikes to have a go on, including bikes that make smoothies, play music and control Scalextric races. The Women’s Tour brings along its own ‘Tour Village’ into the town centre, showing off goods from sponsors and providing giveaways, and will be complemented by stalls from local cycling clubs and an extended local market running along the High Street. Also, look out for British Cycling and local schools taking part in sprint races along the finishing straight.

There will also be plenty of opportunities to watch the peleton as it rides through the other towns and villages of the Borough where Desborough and Rothwell have been known to draw big crowds. Find out about the day’s activities, timings and road closures on our Women’s Tour section of this website.

Last year’s event saw a record-breaking 80,000 people watch the race across Northamptonshire, with thousands in attendance to loudly cheer on these elite athletes as they crossed the finish line. The Tour brought a real buzz into the area and generated an estimated £1.6m for the local economy with spectators, cyclists and media personnel spending on things like accommodation, food and drink, and merchandise. This is an increase on 2015 when 67,500 spectators gave an estimated £1million boost for the local economy.

The event has proved to be incredibly popular locally with everyone from cycling fans to families and schoolchildren and has had an important role to play in inspiring people to get more active. It’s been wonderful to see the way it has been embraced across the county and in particular, the Borough of Kettering.

We can’t wait to be part of the atmosphere welcoming the riders as they race into the Market Place on 7th June – see you there!